All we can say is “WOW!”
Great performances all across the NW division this month! Congratulations to you all.
We would like to call your attention to two of our marvelous northwest choirs…one ’cause all of you can hear/see them on public television. The other ’cause…well, keep reading!
PLU’s Choirs presented concerts early this month in Benaroya (Seattle), Lagerquist (PLU-Tacoma), and at the Arlene Schnitzer Hall (Portland). Oregon Public Broadcasting filmed the event. It’ll be shown this year on KCTS and OPB several times.
NOTE:
December 24- 8 p.m. (KOPB)
December 24 – 9 p.m. (KCTS)
December 25 – 9 a.m. (KOPB)
December 25 – 7 p.m. (KCTS)
December 27 – 1 p.m. and 6 p.m. (KOPB)
The PLU groups were joined by PLU grad, Angela Meade, now of the Metropolitan Opera, for this special event. Photo here:

Don’t miss it! Conductor, Richard Nance tells us that they’re planning this program being shown on 300 PBS stations, nationwide, next year! He also says “We had a blast with this project, and it’s really going to be a beautiful broadcast!”

Now, the following is one of those once in a lifetime things…
Choral Arts, comprised of volunteer singers from the Seattle region and led by Robert Bode, sang about a week ago at the White House (yes, THAT White House) for President and Mrs. Obama. What an exciting thing and what an honor! Each of the singers got to meet the President and the First Lady and the Facebook reports were glowing in appreciation for their friendly hospitality. Look who is standing in the back row of this photo…to Robert Bode’s right! 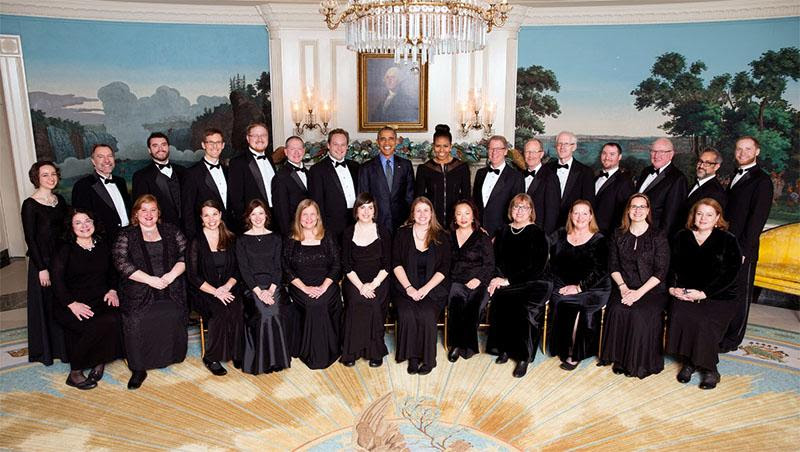 Congratulations (again) to all of you across the NW for enriching the lives of so many people during this wonderful season.
Best to you. Merry Christmas and a Happy New Year!
Your NW ACDA Leadership folks

View all posts by acdawaunison

We would be delighted to welcome you as an ACDA member. This is a group of people who lay aside ego and competition and genuinely work to help each other in making choral music an inspiration in the lives of singers of any age and type of group.

General Questions?
Email the WA-ACDA Board.